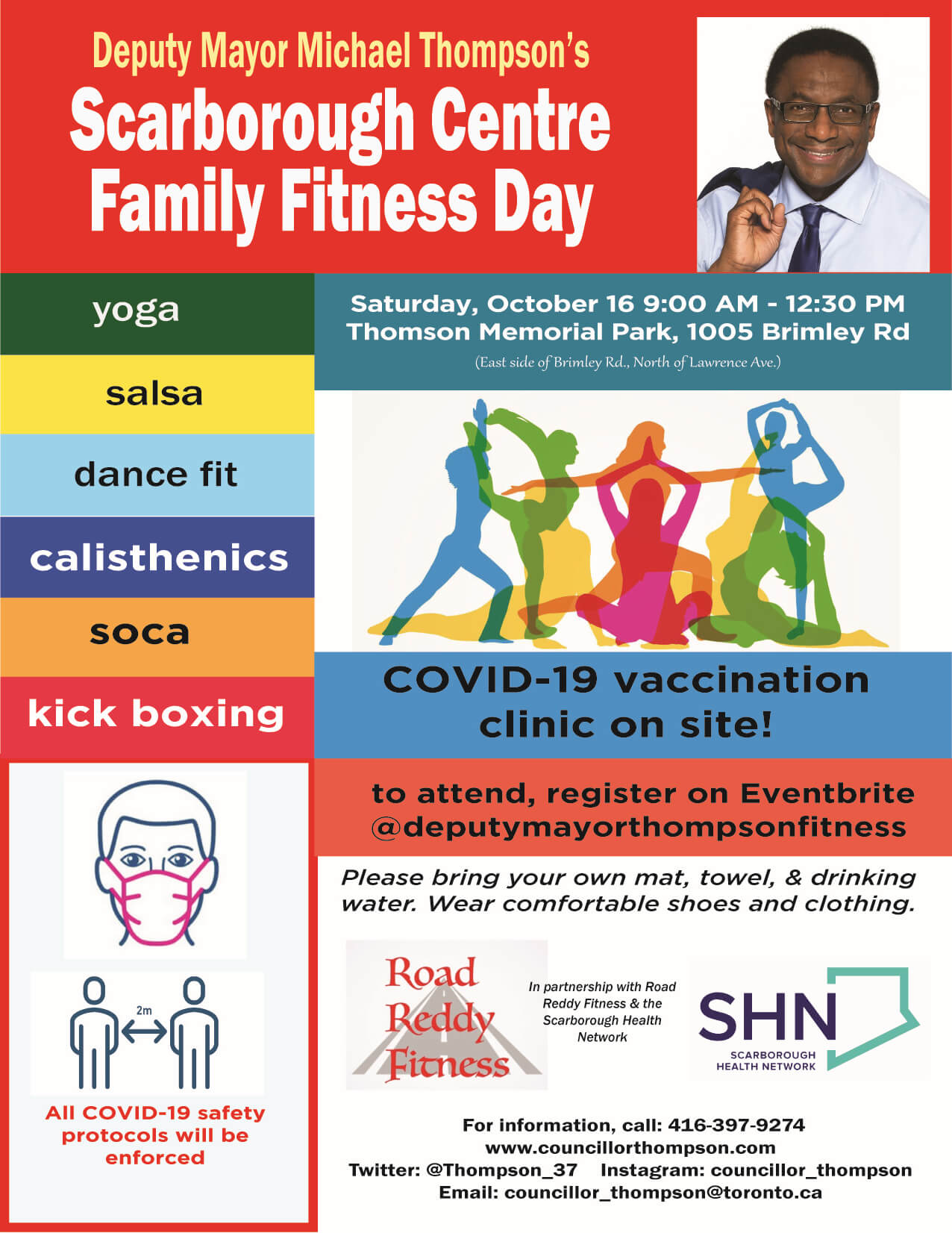 On Saturday, October 16, 2021, I will be hosting a Scarborough Centre Family Fitness Day at Thomson Memorial Park in collaboration with Road Reddy Fitness in support of Scarborough Health Network. This is a free family-friendly event starting at 9:00am-12:30pm and is open to the public to participate in community fitness activities.

The goal of this event is to promote healthy living in Ward 21, Scarborough Centre and to invite members of the community to get to know their neighbours and to learn about fitness and wellness programs offered by the city and local organizations. You will also have the opportunity to get your COVID-19 vaccine on site. Strict COVID-19 protocols will be enforced.

There is a limit on the number of persons allowed to attend, therefore residents are asked to register on Eventbrite to hold their spot. Please click the following link to register quickly!

If you have any questions or concerns please contact my office at 416-397-9274 or councillor_thompson@toronto.ca.

If you live OR work in Scarborough M1 postal code, click here to book your appointment: https://t.co/2gAKJyO2OW.

Deputy Mayor Michael Thompson is Chair of Toronto’s Economic and Community Development Committee and a member of the Mayor’s Executive Committee. Now in his fifth term as Councillor, Michael has earned a reputation as one of Toronto’s hardest working and most effective political leaders.

Under the banner of “getting things done,” Michael is known to his constituents as a community builder committed to bring people together in a spirit of collaboration. He has led and assisted in the formation of local community associations, youth leadership initiatives and Business Improvement Areas, and holds regular public meetings to engage residents throughout his ward.  In 2006, as Chair of the Scarborough Community Council, he led the campaign to create the first ever TTC transit strategy for Scarborough, a strategy designed to significantly expand and enhance public transit services for all Scarborough residents.

In addition to a strong focus on resolving local issues and serving his constituents, Michael’s commitment to developing Toronto’s city-wide economy is longstanding. In his first term in office, he spearheaded the creation of the Wexford Heights Business Improvement Area, co-founded the Taste of Lawrence Festival and established a Job Fair that annually brought thousands of job seekers together with dozens of employers.

Appointed Chair of the Economic Development Committee in 2011, a role expanded to encompass Community Development in 2019, Michael has played a leading role in the expansion of Toronto’s economy, the promotion of Toronto to key worldwide markets and the attraction of billions of dollars of domestic and foreign investment to the City. He was appointed Deputy Mayor in 2018.

Michael is a member of the Mayor’s Executive Committee, the Board of Directors of Destination Toronto, the Board of Directors of Canada’s Walk of Fame and the Toronto Global Forum Advisory Committee. He was a key member of a Toronto project team that successfully lobbied executives of Collision, one of the world’s leading high technology conferences, to choose Toronto as the conference’s home for 2019 – 2021, bringing 25,000 technology executives and investors to the City and injecting tens of millions of dollars into Toronto’s economy.

Michael maintains a widespread network of business relationships that has helped the City to enhance business retention, promote growth and increase private sector employment. His active engagement with business has helped speed the launch of new business ventures, resolved business/residential conflicts and gained business participation in a wide range of community-building initiatives. In 2019, Michael was named Toronto’s first Ambassador for the Night Economy, a role that is helping to spotlight and support businesses that flourish when the daytime economy sleeps.

Michael is a firm believer in the critical value of culture as a builder of strong communities. When he first took office, he co-founded the Taste of Lawrence Avenue East Festival, which brings together tens of thousands of people each year to experience local performing arts and cuisine. In 2013, he led the City’s efforts to create a new arts and culture plan that provided a bold, new roadmap for cultural vitality, strengthened arts spending and launched a new era of collaboration among arts and culture groups across the City. Michael was also the first Chair of Toronto’s Music Advisory Committee, and played a key role in efforts to attract international film and television productions and studio investments to Toronto.

Michael received his public school education in Scarborough, and his BA from Concordia University in Montreal. Prior to entering politics, he earned his business credentials as an entrepreneur in the business and financial services sector. In 2017, he successfully completed the ICD Directors Education Program offered by the Rotman School of Management and Institute of Corporate Directors.

He continues to work with a number of charitable organizations including participation in the LIUNA Local 506 scholarship fund.

COVID-19 has disrupted lives around the world. But I want to assure you that together we are Scarborough Strong! I want to thank the CEE Centre for Young Black Professionals for creating this amazing video to highlight all the many ways that our community has come together to keep #ScarboroughStrong.

City Council meets this morning at 9:30 am. Agenda and background material can be found online: http://secure.toronto.ca/council/#/comm… and you can watch live here:https://www.youtube.com/live/JdffjGrauDc?feature=share
#tocouncil

Get In Touch With Us

Get all the important news and updates from ward 21, Scarborough Centre.